The Pawon temple is also known as Bajranalan – As part of the sacred ritual ceremony of Vesak, Buddhist pilgrims making a journey on foot from Mendut Temple to the colossal Borobudur Temple will pass a small yet gallant temple: the Temple of Pawon.

While in Javanese Pawon translates as “kitchen”, it is also believed that the name is derived from the word “Per-Awu-an” or a place that contains dust. Dutch archaeologist JG de Casparis claims that the temple is a shrine to keep the ashes of King Indra (782 – 812 AD), father of King Samarrattungga of the Buddhist Syailendra Dynasty. The temple is also known as Bajranalan, taken from the Sanskrit word Vajra meaning Thunderbolt (also a Buddhist ceremonial tool) and Anala meaning fire or flame. Thus, Vajranala or the Flaming Thunderbolt is believed to have been a weapon of King Indra and that the temple was, therefore, the shrine to house it.

The location of the pawon temple

Located on a straight line between Borobudur Temple (1.75 km or 1.09 miles to its northeast) and Mendut Temple (1.15 km or 0.71 miles to its southwest), Pawon Temple forms an inseparable part of these two temples, all of which were built during the Syailendra Dynasty (in the 8th–9th centuries AD.). Professor Purbatjaraka, an expert Indonesian anthropologist even argued that the Pawon Temple was an upa angga (or an integral part of) Borobudur Temple.

While small in size, the Pawon temple still has a lot to offer for anyone interested in architecture and history. Pawon Temple sits on a rectangular platform that rises 1.5 meters from the ground. The edge of the base surface, however, is curved, which makes the surface a 20-cornered platform. The platform’s sides are decorated with sculptures depicting flowers and clinging vines. Unlike other Buddhist temples, the body of Pawon Temple is relatively slim, similar to that of Hindu temples.

The top of the entrance gate is adorned with a carved Kala Makara arch (giant makara) without its lower jaw, a figure commonly found in classic Javanese temples. It is suggested that the missing lower jaw symbolizes the destructive aspect of the Kala Makara as the Cosmic Mother, her wide-open mouth uninterruptedly pulling in the universe. All around the outer walls, visitors are presented with carvings of men and women which symbolizing “Boddhisattvas” and “Taras” – Buddhist names for those who have attained enlightenment.

One of the outer walls of the temple depicts a relief of a “Kalpataru”, the Tree of Life that holds divine powers to fulfil wishes. Despite its age, the details on the relief are remarkable. The left side at the top of the tree depicts an Apsara – a female cloud spirit, while the opposite side depicts a Devata – a Hindu guardian spirit. On both sides of the base of the tree stand Kinnari and Kinnara, mythical creatures, half woman half bird, renowned for dance, song and poetry. She is also a traditional symbol of beauty, grace and accomplishment. By looking carefully at the relief, one can even see the small wings of the Kinnari.

On the front outer wall of the temple, on each side of the entrance, there are niches with carved images of the God Kubera in standing position. Kubera (recognized as Vaisravana in Buddhism) is known as the Lord of wealth and the god-king of the semi-divine Yakshas in Hindu mythology. The existence of the Kubera carvings also suggests that the shrine was , in fact, dedicated to Kubera.

Bodhisattva once resided inside the pawon temple chamber

Confirming its close connection to the Borobudur temple, the roof section of Pawon is covered with five small stupas (or also called Dagoba), with slightly different shape to those found in Borobudur.

Even though it is significantly smaller than its neighboring two temples, Pawon Temple holds its own charm in its architectural beauty and mysterious origins. Historians have even dubbed it as “the jewel of Javanese temple architecture” due to its simplicity, symmetry and harmony.

How To get to Borobudur Temple in Yogyakarta Indonesia

Sangiran Home of The Java Man 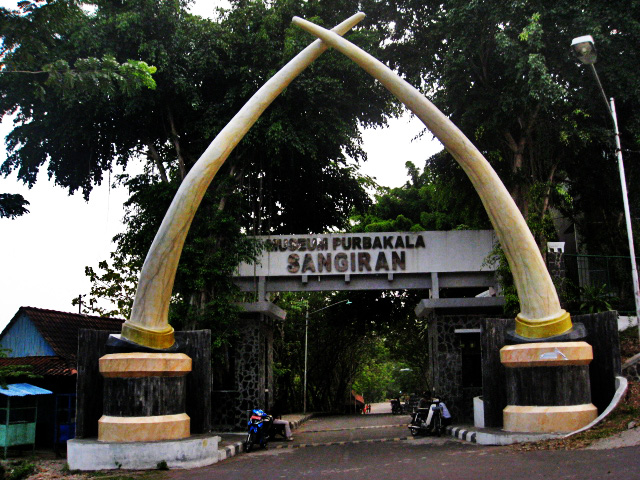